The Batch Record Menu in Options > Preferences > Batch Record is designed to help you make video sequences easily and automatically.

Here’s a quick tutorial to show you how the following video sequence was made. The sun was filmed with a Hydrogen Alpha filter, Altair Astro 102 ED Triplet refractor, and Altair Hypercam Mono camera using the Batch Record mode in AltairCapture.

The following workflow was used to create this video:

1) Camera was set using Batch Record feature in AltairCapture to make 41 videos of 2000 frames each using an Altair Hypercam. (Some videos were discarded due to clouds). Gap between videos was set to 10 seconds to allow for refocusing or other eventualities. Each video was auto-saved with a sequentially numbered file name like 00001.SER, 00002.SER and so-on, to retain their position in time.

3) The resulting numbered .PNG image files were imported into Registax 6 for wavelet sharpening. Note they still retained the sequential numbered file names from the original video…!

4) The wavelet-sharpened .PNG files were manually aligned and cropped in Photoshop, mode was changed to 8bit, then exported as individual sequentially numbered .PNG files (i.e. 00001.png).

5) The sequentially numbered aligned .PNG files were imported into PIPP, which automatically keeps them in sequence-order (called join mode), and exported as a .AVI video, then uploaded to Vimeo.

The capture process in AltairCapture was done using the Batch Record and Record presets. This is convenient to use, and ensures an even spacing between frames:

Step 1) Set the Batch Record settings in the Options > Preferences > Batch Record menu. Choose File: Name Format: nnnn (sequence) so that you keep the resulting videos in the right order. In the “File Prefix:” box, you can type a memorable name like “Solar Prom Video” to keep track of things. Choose a “Frame limit” of 2500 frames: 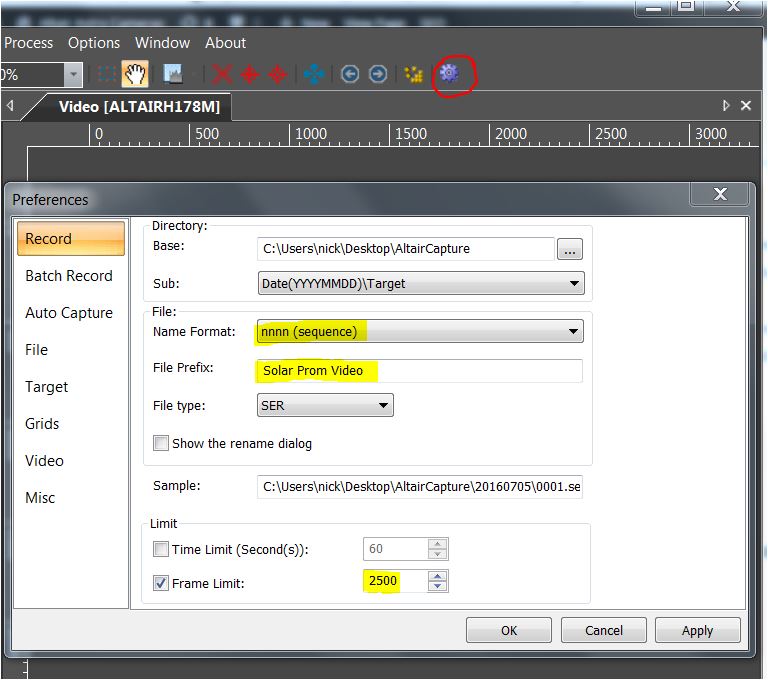 Step 2) Set the interval between the videos in the Batch Record preferences menu. In this case 12 videos resulted in 8 total due to clouds. A time interval of 20 seconds was added between videos to ensure framing was consistent, and that the telescope hadn’t drifted off-target: 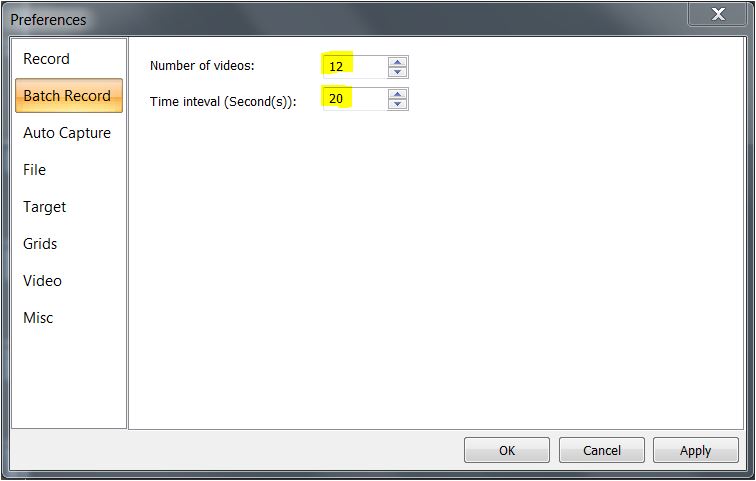 Step 3) Is to focus camera/telescope, frame the subject, and set the exposure / gain settings, by means of the capture & resolution menu.

Step 4): Press the “Batch Record” button or press the F10 key to begin the sequence. Now all you have to do is keep an eye on the framing between videos.

By the way, you can also capture sequences of “still frame” images too using the “Auto-Capture” feature. For example you can capture sequences of long exposure frames for deep-sky stacking or meteor hunting, create animations of clouds boiling, and even create stop-frame movies with your Meteor lens. Planetary rotation videos are another great way to use the feature.