This article is aimed at the new owner of a modern F8 or faster ED Doublet or triplet refractor who wants to star-test it, and has already read a little about star-testing online. They are surprised to discover that the star-test looks nothing like the text-books or the star-test images in green light, which may have been provided by the manufacturer using a monochrome laser like this. Why is this?

Typical 140mm F7 ED Doublet star test with monochromatic laser. This image in green 532nm wavelength shows intra (left) and extrafocal (right) images in stages as they collapse down to a focused star point in the centre. The test was done in an environmentally controlled and insulated room after a 3 hour cool-down period, hence there is less atmospheric distortion, however it cannot be completely eliminated.

The reason is that optical design does not actually allow for symmetrical patterns when testing modern fast ED refractor telescopes in white light, and many old star-testing manuals don’t take this into account, or were based purely on reflectors.*

Let’s jump in with the headline:

A white light star-test is a good guide to collimation, however, and their roundness is relevant because that tells you about things like astigmatism and coma – air currents permitting.

Ideally, you should be checking the star image just a tiny bit inside and outside of focus to check for astigmatism or coma, and then mainly in-focus.

All modern ED doublets (say faster than F10) and fast triplet refractors (below F7) are computer-optimised to perform best in a certain wavelength, or a range of wavelengths, at the expense of others.

Modern fast refractor designs are optimised to put the most colours into the in-focus image. Those colours will split out again on either side of focus. Most are optimised in the green wavelengths which to the human eye, is most sensitive. By “fast” we mean ED doublets with a focal ratio less than F10, and fast ED triplet refractors, say, less than F7.

Technicians performing optical testing and alignment often use a pure green wavelength to test optics are adhering to their design. Star-tests and optical test reports are usually provided in this wavelength.

Other colours have different wavelengths and interfere with the test, and when they overlap, the diffraction patterns cannot be seen easily, leading to a “mushy” effect within the expanded airy disc usually more on one side than the other when the star is de-focused.

Therefore a telescope which gives a green star-test like this:

Typical fast ED Doublet Star-test in green light with a green filter. Note the lesser contrast compared to the green laser image above. The 3 small indentations are not an optical defect and have no effect on the in-focus image quality – they are caused by 3 lens spacers and are quite common in refractors. Often mistaken for “pinching”.

Will give a white light star test like this: 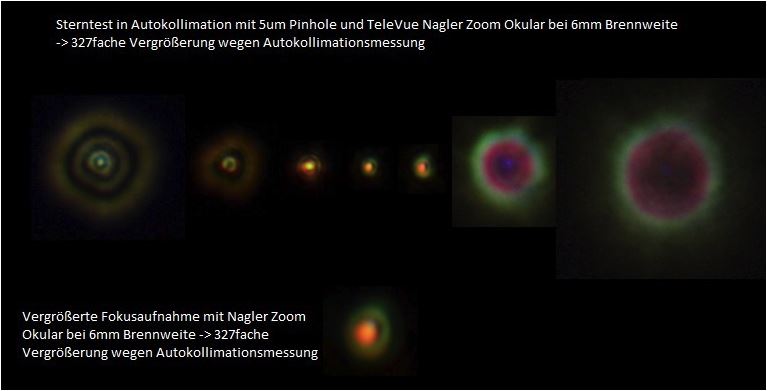 Typical Fast ED Doublet Star-test in white light. Note the difference in extra-focal and intra-focal diffraction images, and the in-focus star in the centre with it’s little first diffraction ring. The distortions are due to air currents causing the image to “dance” around (the overall impression was even) and this is a single freeze-frame with contrast enhanced to show colours more clearly. This is the closest to what a star-test in the field looks like.

As you can see, in white light, the star image appears to be asymmetrical out of focus, and kind of “mushy”, usually on one side, which, if you read all the text books on optical testing, is a big no-no! However all is not so cut-and-dry here – in fact the “mushyness” is caused by many diffraction patterns in different colours being superimposed on top of each other. This happens because the colours have split and focused at different points. (This effect lessens the longer the focal length. When you get to say F12 or more the diffraction rings start to separate more and become more defined, though still overlapping).

Also, when we look at the results of Ronchigrams and Foucault Knife Edge Tests (which both show correction), as well as a Lyott Phase Contrast Test (showing overall smoothness of the optic), we find that this lens is actually an acceptable example and (this 140mm unit in particular) gives a good in-focus high resolution image with barely any discernible colour aberration. 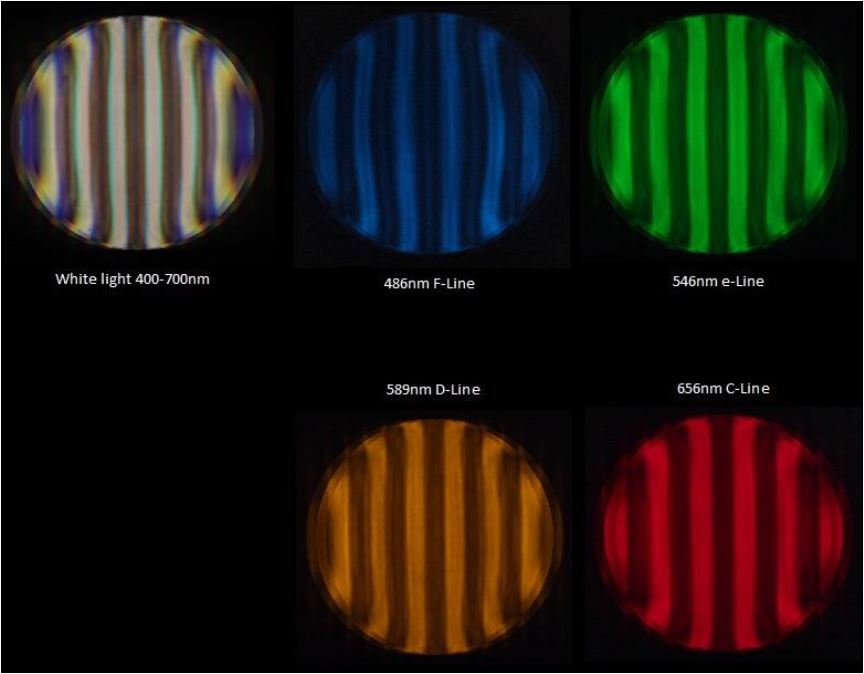 To sum it up, to get the best star-test, you really need good conditions, some consistency in testing, and to really consider how the image appears in-focus. Ideally, you also need a green filter if you want to see diffraction patterns clearly.

In fact, more often then not, you will not get any useful results, nor can you draw any useful conclusions about the optic quality if the seeing isn’t right, or the telescope isn’t fully acclimatised.

Of course, we are assuming your lens is in good shape and collimated and set up correctly. Gross issues like mis-alignment of the objective lenses (for example in a damaged scope), pinching (scope not acclimatised / cell and glass not acclimatised to ambient temperature), astigmatism (various causes including polishing errors, non-uniform glass with striae, assembly errors), and other significant errors, are easy to spot in white light.

Here are some guidelines for star-testing a refractor, and any other telescope with a lens or lenses in the optical train:

1) The best test of ANY optic is in-focus. When the star is in focus, ideally you should see a clear but faint first diffraction ring around the airy disc in focus, which should be clear, and round or evenly illuminated as possible (air currents will cause it to dance around a lot). If the atmosphere allows this first try, then you are frankly quite lucky. It can take many sessions to see this and conclusions drawn in one session aren’t very relevant. Choose a star at least 40 degrees above the horizon! You want to be looking through as little air as possible.
2) Use a green filter to separate the diffraction rings from each other and increase the contrast if you want to get an an informative view. Professional star testers use green filters to get rid of colour overlap, to isolate one wavelength. Choose a green filter with good transmission at around 530nm green light, the wavelength of most optical test reports. Some optical test reports are done using a 532nm laser which being monochromatic will always give more contrast than filtered white light.
3) It is best to use a good quality Orthoscopic at around 180x at least for a 5-6″ refractor to see the airy disc. A prism diagonal can improve things further.
4) Conditions. Be careful testing in winter and if the temperature is much lower than the storage temperature, let the telescope cool down for at least two hours for a serious star-test. The best time is May/June/August – balmy and still air are your friends. Winter may have good transparency, but the temperature differential is high between day and night (as well as your house and outside) and the seeing is usually awful in the UK, with many cold fronts around. Star testing any a telescope in an urban location is never a good idea. Buildings usually have a large column of warm air above them which distorts the star image considerably no matter how well insulated they are. Concrete soaks up heat during daytime and sheds it at night-time (why you should never use it for an observatory floor) as do tarmac parking lots, and large masonry surfaces. Green fields free from concrete are your friends, as are large bodies of water nearby like lakes and so-on.
5) One star test isn’t going to cut it, nor is one eyepiece or diagonal. Take your time and try a few combinations. You will soon realise that the eyepiece or diagonal, like atmospheric conditions, make a big difference.

*  Reflectors without any glass in the optical train should ideally show identical diffraction patterns each side of focus, though they rarely do in reality. Schmidt Cassegrains do exhibit colour aberration caused by the front meniscus lens.

These further articles are well worth reading to learn about optics in general and also contain much wisdom. In particular these quotes are relevant to star testing refractors:

“Identical inside/outside rings in an achromat is normal. This is due to the nature of chromatic aberration, which take all colors, except green, far away from focus, where they cannot interfere with the diffraction pattern. In an Apo lens, red, yellow, green and blue are all very close to focus, but not perfectly, exactly at the same identical focus. These colors tend to interfere with the perfect diffraction pattern. Every Apo lens I have ever star tested, even ones that tested close to 1/20 wave P-V, shows different inside and outside patterns of interference. This is normal. By contrast, I have an 8″ SCT that shows perfectly identical inside vs. outside diffraction patterns, but tests only 1/4 wave. The real test of an optic is not so much how the diffraction pattern looks outside of focus, rather, how much extraneous junk is floating around a star when it is in focus. (in my 8” SCT there is quite a lot of that). In an achromat with perfect optics, there is a lot of unfocused blue and red light around any object. The brighter that object is, the more that light interferes with the image. One saving grace for achromats is a set of filters. It does not “fix” the chromatic aberration, rather it lets you see the image in one color in monchrome very sharply. If the outer rings are identical on either side of focus, there is no significant spherical aberration. What you see in contrast difference on the inner rings is due to chromatic effects. Use a green or yellow filter (in fact, use them both at the same time) to isolate the middle of the visible spectrum.”

“Using filters in the peak visual wavelengths such as a Wratten number 58 filter (dark green) or number 15 (dark yellow) will help in your testing, especially with refractors, because of their chromatic and spherochromatic aberration components, which can make the star test look worse than the optic really is. Focus on the star, and then focus out 5 or 6 rings on either side of focus (inside and outside). The most important area of the optic is the edge, ideally the outer most thick ring should appear identical on both sides of focus. That means the thickness, brightness, texture and hardness/softness should be the same. If they are just slightly different, the optic is a good one. A gross difference, however, is a bad sign.”