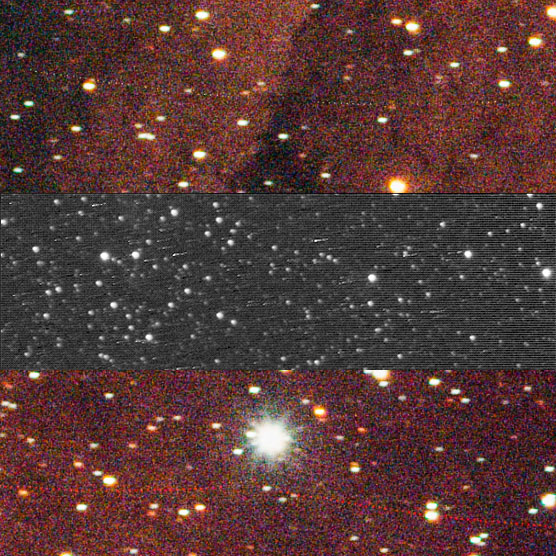 This image shows “Pixel trails” (AKA pixel rain, walking/creeping/directional noise). This pattern can appear in stacked images composed of sub-frames imaged with the same camera on the same night. The final image looks “streaky” with little trails of bright pixels in more or less the same direction.

In the example opposite, we show close-up examples in both colour and mono CMOS camera images. In the lower image a single warm red pixel shows a trail from left to right.

“Creeping noise”, “Walking Noise”, “Digital Rain”, “Directional Noise”, “Correlated Noise” and so-on are all common names for this issue, but are not accurate descriptions, because actually the noise isn’t “moving” at all. In fact, the sub-frames all have the same fixed pattern noise and consistently bright pixels on every frame. it’s really the telescope’s field of view which is moving – but only very slightly between each frame.

The streaky effect is caused by stacking sets of sub-frames which show a small but consistent tracking drift in the same direction, relative to each other.

These small tracking errors are not large enough to always show elongated stars, thanks to atmospheric blurring and/or oversampling, but often if you look closely, the stars are elongated slightly in the same direction as the drift (see top and bottom colour images opposite).

Although auto-guiding will compensate to some degree by putting the star more or less back on centre for each frame, the stacking software will be trying to place stars on top of each other relative to the previous frame, and the pixels are very small compared to a star. Therefore the cumulative effect in the stacked image will still show the pixel trails quite clearly and distinctly, often with slight or no visible star elongation. The direction of the trails is usually aligned with the RA axis which is the main tracking axis of the mount, following the Earth’s rotation, but the trails can also show a curved or irregular pattern if there is also error in the DEC axis, or external vibration.

1) “Cable pull”. This is when the mount is pulling against cable-resistance in the RA tracking direction, effectively restricting tracking. Letting cables hang free helps. When tying all cables up together or putting them in a sheath may look nice and neat they can make one very stiff cable which can harm tracking. PHD does a good job of showing consistent tracking issues with the “target plot” diagram in the software. When the mount is unbalanced, the target diagram will show a pattern of dots averaging more in one quadrant, rather than predominantly the centre.

2) Balancing. Check if the telescope balanced on the mount when it is aimed at the target or something has changed in your setup since you last balanced the scope. Even racking the focuser in or out after mounting a camera can cause a significant change in balance, especially with long refractors, cameras and filter wheels. Loosen the mount clutches while the telescope is aimed at the target, move it in RA, and see if the telescope tries to move on it’s own. If it does, then it isn’t balanced when pointing at the target. For best mount performance, it is often better to “push” against the RA axis so some intentional un-balancing is often done, but it may be excessive for your mount, or your setup may have been balanced in a different position.

4) Differential flex between guide-scope and main imaging scope. This is unusual because it doesn’t often cause a “directional” pattern, but can be a contributing cause. Use all-metal guide scopes which are rigidly mounted relative to the optical tube (no plastic screws or spring loaded pins) and make sure everything is well tightened up – for example, the thumbscrews holding the guide scope.

5) Better dark-frame subtraction will reduce the warm pixels and therefore visibility of the trails. The fixed pattern noise which hasn’t been cancelled with darks is what causes the issue in the first place. Often applying bias or other calibration files with incorrect settings can cause incomplete dark-frame subtraction.Sigma clipping in in various calibration and processing software identifies consistently “warm or hot” outlying pixels, and helps filter out those which are not subtracted by the application of dark-frames. A cosmetic fix which will help, but is best not over-used.

6) Dithering – although commonly advised as a fix, masks it by “breaking up” the consistency of the drift pattern and placing the warm pixels more randomly. More often than not, the trail is still visible and it’s better to eliminate the root causes listed above.