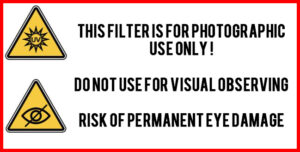 The Altair 395nm NUV filter selectively passes light of the two main Calcium wavelengths emitted by the sun: The CA-K line at 393.37nm, and the CA-H line at 396.85nm.

Imaging the sun: The filter is to be placed in front of a high speed CMOS video camera for displaying detail in the upper solar atmosphere, at the boundary between the photosphere and the chromosphere. Structures which cannot normally be seen by the human eye or cameras are revealed, including fast-evolving Ellerman bombs (micro-flares) and Plages, (bright networks near sunspots). Solar granulation is also enhanced, as well as umbral detail around sunspots. 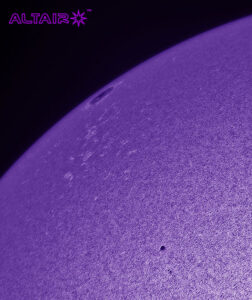 IMPORTANT: The 395nm wavelength is harmful and almost invisible to the eye, therefore the NUV filter is intended for photographic use ONLY. A pre-filter of at least OD3.8 is required to reduce radiation damage to the filter.

A Herschel Wedge, such as the Altair Imaging-Ready Solar Wedge can be used, or solar film, provided the manufacturer’s instructions are followed correctly. Refractors are usually employed for solar imaging, however reflectors can be used, provided they have a large blocking filter over the front aperture (usually solar film or glass filter because Hershel Wedges cannot be used with reflector telescopes).